This week a mean streak of violent storms pounded us in Western Kentucky. Storms happen, the Cabin is built halfway up a ridge so shouldn’t flood, up here in town I didn’t hear any sirens. I even worked late to get stuff done and didn’t leave the factory until after 7 pm.

I stay up in town during the week to be close to work, but could still barely get home. The buckets of rain falling were hippo-sized! 20 mph all the way. That put me in a state of agitation by the time I got to the house.

I turned on the radio to get the alerts. Severe thunderstorms, yeah, yeah. I opened a can of beans for supper. Then I heard this: 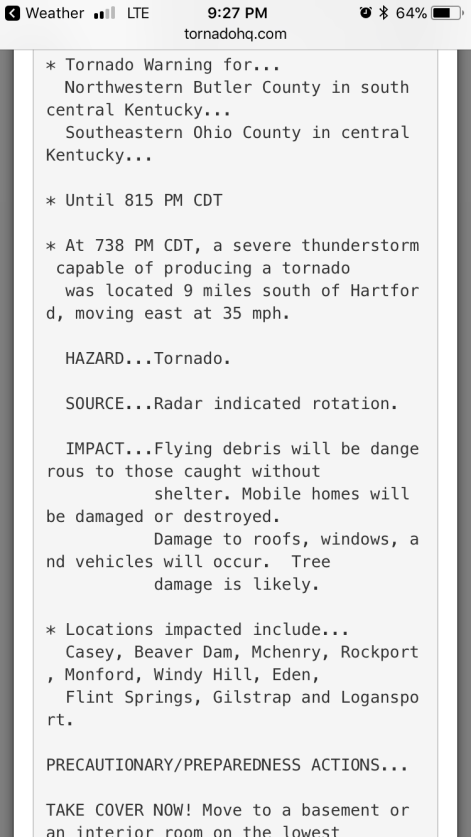 I have NEVER EVER heard Flint Springs called out in an alert of any kind! It is not a town, it has no traffic light or post office, it is a gravel road! Every hamlet called out in the warning at least had a store or something, and they all surround the cabin, my precious, beloved home place as if they were the red circles around the big red cabin-shaped bullseye!

My heart thumped like mad. I turned the radio up to hear a repeat, maybe I was mistaken. The rock and roll station abruptly came back blaring Jimi Hendrix ominously whispering, “…and the wind cried MARY…”

Rural areas don’t have eager reporters nearby. I don’t have any close neighbors. Nobody would know. Schrödinger’s Cabin!

I panicked and emailed my boss that first thing in the morning I absolutely had to go to the cabin over an hour away and ease my mind OR face the carnage. I even told him about Jimi. I wavered…I could go now…no stupid, the weather was still too way too rough and the way there was probably flooding. Have faith. Have common sense – what could I do there at midnight? I forced myself to wait.

At dawn (so I could see the debris on the road) I headed south. I measured my breathing carefully until I got to the gravel and had to get out  to move big limbs off the road. A very tall tree had fallen across the road but was held up enough by the trees on the other side for me to get through. I craned my neck to get the first glimpse of the cabin as I powered up the steep driveway. 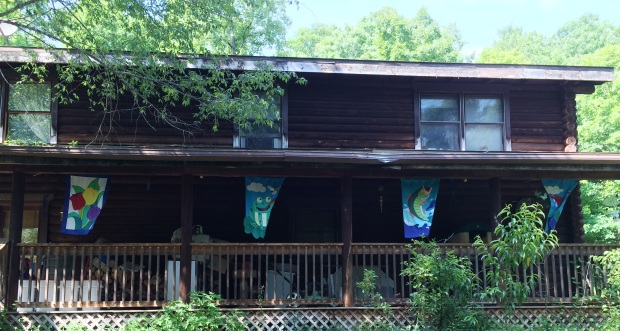 Pristine, even the flags. Halleluiah!