I have a confession to make. I didn’t start cleaning up because I couldn’t stand the stacked and jumbled- 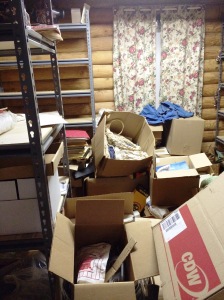 tumbled boxes of plunder that impeded the use of the great room, that wouldn’t let me even reach the windows for a breeze. I did it because of a premonition.

I had a powerful dream that I was in a shack with no lights, on a dirt floor. I was making a small fire to heat some meager food. I was sitting cross-legged, wishing I had taken precautions against the monster tornado that had demolished the cabin and all I owned. I was so sad that years of my accumulated history and the beautiful things I had were gone. Tornado, a danger I should not ignore.

Twisters are not uncommon in Kentucky; the vast swarm of them that destroyed Xenia, Ohio in the 70s also ripped up Cherokee Park in Louisville where I grew up, and tore up part of the Fairgrounds. I won a science fair because of that! 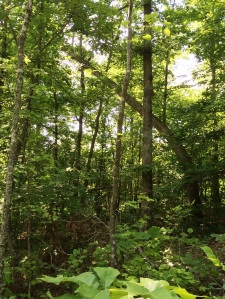 The old-timers around here talk about them. I put in a basement as a safe place in the event of one. I respect their might.

I came to believe the danger was real and imminent. I started packing crammed load after load of stuff up to the house in town. I took thousands of books, appliances, tools, clothes, DVDs and CDs. Up went the vacuum cleaner and the musical instruments Up went the dried fruit, the sewing machines, the cloth, the painting accoutrement, the pictures on the very walls. And I waited, worried about my beloved cabin.

A month went by with no catastrophe. I would not let myself doubt. Maybe I’d been given time to move my stuff? Then came the storm I’d waited for. The sirens went off in town and I got Ma to the basement. Over the radio we listened intently. More warnings. I didn’t care about the sightings 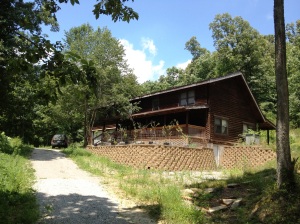 near me in town. A tornado was spotted along the Green River in Muhlenberg County headed northeast. That aimed it at the cabin. It dissipated. Then a spotter reported one south of Hartford, going south toward the cabin. Which direction would it come from?

Several homes just a couple miles from me were hit. I drove down with trepidation. I looked closely for damage along my route. The cabin was safe. I felt the danger was over. Relief flooded my being.

Gee whizz, with the cabin cleared out I had the perfect chance to clean it up before I hauled it all back! 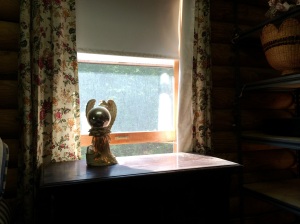 Am I upset because the cabin didn’t really get destroyed? Give me a break, please. I am grateful! And now after years of neglect I am well on my way to making it into a place I’d be proud to take pictures of.