I get a newsletter from Chelsea Green, a homestead and resilient farmer kind of publisher. I like adding nuts into my whole wheat bread and gosh, they’re expensive. I tried planting English walnuts a decade ago and they would still be maturing if they’d lived. I am not that fond of the common black walnuts around here though I do use them. I’m not generally one of those instant gratification types, however three years for a filbert, AKA hazelnut, to mature is a persuasive argument for them. 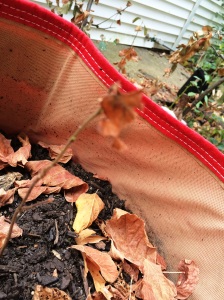 Alas, the State of Kentucky apparently has some pernicious anti-filbert disease rampant such that nobody grows them here. Ha! Not until an outfit called Badgersett hybridized some resistant ones. They have a research station where they have many versions of filbert depending on what you want, geared toward the commercial growers.

I got six in the mail. Their customer service is slow and frustrating but the little seedlings eventually arrived with each in its own cozy tube (hence they call them ‘tublings’) and I planted them according to instructions, taking all the precautions against squirrels I could. You see, these seedlings still have their little nut attached and would seem to present a great temptation 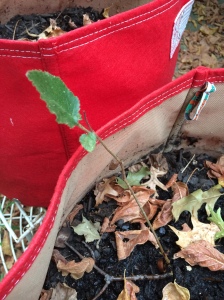 One positively (negatively?) dried up in a blink, prompting me to dedicate myself as Aquarius the Water Bearer (actually I’m under Cancer the Crab). Two more succumbed during August. One seemed to be hanging in there last Friday, but this Monday it was a goner. ONE SURVIVOR! Isn’t this tiny fella a true beauty? This tender darling deserves an extra dollop of attention.