The grayness all around us appeared as ephemeral, wide wisps of varying chiaroscuro tones, as might fine smoke from a fire composed of a variety of combustible items seem on a clouded night. Darkness prevails, only a dim glow coming from the stuff guides our way. Pressing with force through any section of it leaves us on our knees, panting, in tears. Jenny holds up better than I in that regard, quicker recovery, yet she has a feral look about her.

The vertical striations of the dimly lit ribbons and sheets of the stuff mock me as I rock back on my heels. I don’t look twice and assume ‘twas an illusion as I did at first. Now with certainty I know the fibers, flush with the main material, are alive and usually move in exceedingly slow undulations. They had attacked in concert when once early on I attempted to use my saber to carve my way. They vibrated at an ear-piercing pitch that melted the fine steel blade while my hand felt frozen to the hilt. I needed many hours to recover.

Jenny hoisted the satchel to her lap and extracted another Chanticleer bar, passing it to me. What would I not give for plain water! “Jen, can you fetch up my bottle from there as well?” I waggled the so-called ‘energy bar’ at her. “Thanks so for this lavish feast, all I need is the wine to ease it down!” The endeavor to lighten the benighted atmosphere failed.

Silently, she passed the effervescent drink to me. Though clear to sight, it tasted cloyingly sweet. Still, it was wet. The jumbled skeletons we’d liberated the satchel from must have acquired some strange tastes to carry such goods. “Well my girl, let’s not take a holiday to any country that considers these to be normal fare, eh?” Her lack of propriety with the deceased had taken him aback until she told him she’d survived untold months here by harvesting thusly. The implication, what she must have endured, had stunned me.

Instead of either ignoring me or at least smiling, she focused her blue eyes on me with great severity. “Fall through the next barrier. Fighting is not only damned painful, but it’s the exact wrong thing to do. These things feed off of your manly exertion. Try to be less of a tasty treat for them for once!”

I’d found her on the far side of a particularly nasty section. I nearly fell across her as she sat Hindu-style and was inordinately pleased to not only find another person but for that person to be a pretty woman, a welcome bonus. Now she desired me to give myself up to the freak curtains? “I could be entrapped that way, not a preferred end.” 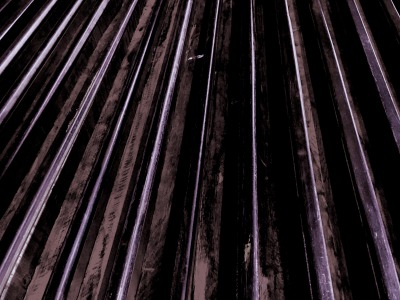 deliciously hard that the gray meanies held on and drained them. How do you think they get the energy for that low-watt radiance? So fight ever more heroically until the gruesome conclusion occurs or follow meek little me.” She rose in one fluid motion and shifted the satchel to her shoulder. “I have done it many, many times buckaroo. I have only tried to muscle through since I met your eminence because you are alive. I mean, I’m alive too, but I haven’t found a way out. I thought, since you were still alive, your way might lead us out of this accursed place. Not.” She walked up to a wavy wall, thick with those dangerous striations. She turned to face me, closed her eyes and fell backwards. She vanished.

I panicked. Not alone again, oh God please no, I beseech you! As I sensed my form starting to collapse in despair, a blazingly bright thought flamed through my berserk brain: She is from far into the future and knows about this! Perhaps these fiendish mazes are known and studied in her time! I would be an infinite fool to reject her lead!

I watched for her as I fell forward. She had learnt to stand aside, and better, caught my limp form. Once I achieved balance, I bowed in gratitude. “You, madam, are not from a far-off country as I ‘til recently supposed. Or you may be, whatever. The point being that you are a wise woman from the far future!”

Her outright hilarity for the notion rebounded from me. “I know I’m right. Did you not understand how to traverse these barriers with no harm?”

She sobered instantly. “I didn’t come in here knowing a damned thing. On Day One I observed a group of half a dozen Pygmies in feathers all jump in with spears at one time and get fried before my head even believed I was in a cave with Pygmies. Then two shogun-looking guys came at ‘em with some kind of karate crap and made the stuff pulse with light. A granny jabbed with her cane and cussed for way too long. I’ve heard thrashing children’s screaming abruptly stop.” She halted to calm herself. After a few deep breaths, she resumed less vehemently, “Mostly I have heard not one thing, not an echo, no hiss, not any noise but my own whimpering. Plan A doesn’t work, try Plan B; simple as that.” She sat on the cool stone floor in her odd manner, head hanging.

“Oh Jen, were I home I would call you Lady Genevieve and ply you with your every desire. As befalls many a feminine genius, you underrate yourself. Think, Lady Genevieve, what is the method to thwart our torment? What alchemic knowledge does your beautiful face hide?”

“Alchemic? I go around with you for a month or so and suddenly I’m a magical genius because I can fall. Okay renaissance man, I’ll play along.” She stood and spread her arms high and wide. “Oh mighty foe, we have wandered to and fro. We have paid a high cost and are tired of being lost. We each are not a lowly ape. Show us true light so we may escape! Abracadabra!”

She dropped her arms and stood agog. I turned toward her gaze and indeed, there beckoned a faint light on high. The smoky veils parted as the Red Sea did for Moses. Hand in hand, we walked to the strengthening luminosity though it hurt our tender eyes. ’Twas the dear sun we saw as a crown atop a vast forest! Freedom at last!

We clung together lest we be returned to our own times by some nefarious means. Who contrived that awful game? Why were we chosen? What demonic art could enable such a thing? She claims no act or invocation of hers played a part in our rescue though I protest to the contrary. Lady Genevieve bade me leave off the questions. We have made a life for ourselves in this hospitable paradise, not our cherished Earth. Others have made their way out and we have created a small hamlet where we share our skills and of course, always wonder. Our family thrives. We do not approach the Cave of Living Smoke.

Oz reached in and grabbed the cord. He ran his hand down it until he came to the plug. Crawling further under the kitchen sink, he plugged the dispose-all in. He leaned out and back against the island cabinets. The floor needed mopping. He swatted the dispose-all box out of the way to find his coffee cup. That dispose-all had been sitting in plain sight on the shelf at the end of the island for close to two years. Maybe four, he’d bought the hardwire kind instead of the right kind and had to make it pluggable. Not doing that, not putting it in, is that why she’d left him? 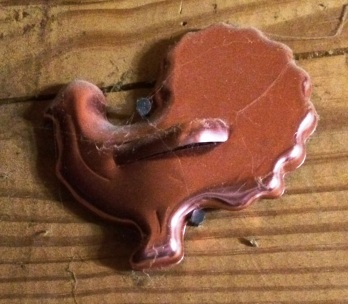 He made his way to his feet, not near as easy to do these days, dumped the cold coffee out and poured a fresh cup. Together for 39 years today. Together? The house was way too quiet, but damned if he would turn that old public radio on and run it all live long day. Car Talk forever reruns irritated the crap out of him; they was wrong the first time and now he got to hear them cough up the same wrong answers over and over again.

His eyes caught the big old clock on the wall. That Scottish music show would be on, so he pressed the button and there was Fiona Ritchey telling about some crazy Spanish bagpipe player. He looked up at the ceiling fan that would not come on any more. The good Lord knew why; he’d have to go flip the breaker off and bring up the ladder if he wanted to find out. Gosh, whoever was playin’ that fiddle sure had the blues.

That job done, he put a cold hotdog on a stale bun and squirted that last of the mustard on it. He remembered Delphina making him say the word ‘listeria’ and made him promise not eat them raw. He stuck it in the microwave and nuked it for 44 seconds. He finished it in four bites. That was the last bun. He could run up to the store and get some kraut to put the last two in, if he felt like it later.

He rammed his shoulders back to make the recliner do right and set his Sprite on the side table. Putting his feet up sure felt good. Seeing a pair of cardinals flitting around in the yard made him miss her more. They used to sit under the poplar tree and make kraut so many years ago. He peeled the cabbages, picked off the worms and cut them in half while Delphina shredded them into a crock. While she poured on a layer of salt, he chopped the nubs she couldn’t shred and they’d do it again until they had two crocks full. They still had the two heavy white plates that fit perfect in the crock to weight it down, and the crocks, somewhere.

He blinked, awakened by Erica Brady saying she’d just played Bill Monroe. Dang, he’d missed it! The Lost City Ramblers was good, though, and anything with Rhonda Vincent in it. Barren River Breakdown really was a great show, homegrown from WKU. Delphina always was givin’ em money, and he guessed it was worth it. He would not shed a tear no matter how lonesome he got. He sipped his warm Sprite and wondered why, why, oh why? He needed her like a ship needed water and its sail needed wind. He felt aground and slack without her; shipwrecked.

The front door creaked open and he sat up rod-straight.

“Oscar, where are you? I got Irma back home and all. You know nobody else came to see her to visit or anything? That poor woman has got nobody at all when she gets dire sick.”

He got to the kitchen nearly breathless. There the pixie stood, setting her purse by the empty chili can he should have thrown away. “You’re home!”

“I had to get back to celebrate our 40th anniversary, didn’t I?”

“You may be a wizard with most things, but you ain’t got a head for time. I’ll make that German chocolate cake you like, with plenty of coconut. That box I had to kick out the way must mean you got that garbage disposal put in. Thank you! No tellin’ what else Old Oz has been up to the last couple days.” She spread her arms out wide. “Here you rascal, give your girl a hug!”