“Caleb, get your ass back over here and hold this ladder!”

“Uncle Johann, there’s something in the woods making noise!” 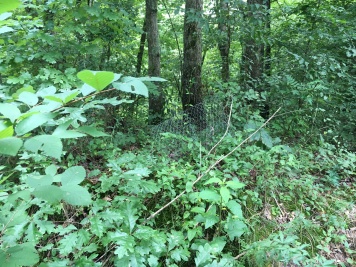 “There are a million things in the woods and most of them make noise. Hold the ladder!” Johann had a hod in one hand and a trowel in the other that also grasped the ladder rungs. As soon as the boy got back on the job, Johann set his supplies on the roof and eased off the ladder. Black clouds were building in the south, maybe they’d pass by. Still, the last few layers of chimney would need to cure before they got buckets of water poured on them. The realtor said prospective buyers would be by tomorrow!

He put his tools in the canvas sack and lowered it down by the attached rope. To nobody. “Caleb! Where are you? I need a couple yards of plastic sheeting up here and a roll of duct tape. Caleb!”

The kid did not appear, so Johann carefully climbed down and got the plastic. He turned off the radio news; where’d they got Gerald Ford from anyway? “Caleb!” Where had he run off to? Nephew or not, the kid lacked any sense of responsibility and needed a haircut. 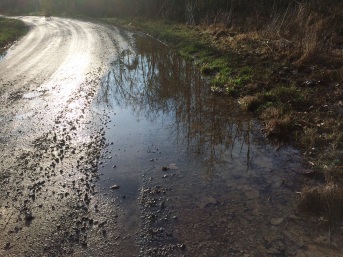 The storm advanced fast. Johann strained his eyes through the window of his truck and solid sheets of water. Would the gravel road be washed out? When the time between the lightening and the thunder lengthened and the rain stopped but for a drizzle, Johann got out of the truck. “Caleb!” He walked along the gravel drive that divided the cabin from the deep woods. “Caleb, I’m serious, I got to get you dropped off and me home.” He wished he’d looked for footprints before they’d washed away.

He stepped into the viney jungle. The Viet Cong had his sister’s boy. Or had the green kid stumbled into a spiked pit? Or had a poisonous snake fallen on him from the trees? He looked up and saw no snakes. He studied the ground for wires, broken twigs, booby traps. He crept slowly, alert.

Movement. He crouched and riveted his attention on the source. He’d lost his weapon. He would tear a gook’s throat out by hand to save his nephew. He did have his field knife and tape on his utility belt. A deer looked around, didn’t see him and went on along its worn path. Johann had learned stealth the hard way, and had let his buddies down because of his clumsiness. Dead buddies. He crept with no noise, like an Indian.

He studied the narrow creek as he smeared mud on his face and bare arms. The creek did not appear to have been disturbed except for the deer, but it was hard to judge as the water ran muddy from the rain. Caleb’s voice, that way. He hurried as stealth would allow. Other voices. He’d guessed right the first time: Viet Cong.

Caleb sat on a folding stool as one gook stared him down. He appeared unharmed. Another walked around the maryjane patch as a lookout. The plants were doing well, starting to bud out. While the inept lookout strolled the far side, Johann collected some pliable vines and stuck his foot out to braid them into a rope. He coiled that one and finished a second one before the guy got close.

The perimeter wire was obvious. Johann yanked the guy over the wire, threw him down, hogtied and silenced him with duct tape, you always carry duct tape, and taped him to a tree while the one by Caleb shouted loud enough to hear in Saigon. Johann took the opportunity to scurry around behind him. He popped a loop of rope over the gook’s head and yanked as he disarmed him of the shotgun. “Any more of you creeps? Huh? Any more of you?”

Johann motioned for Caleb to take the weapon. Johann had his adversary tied and taped into a fetal bundle in no time.

“Uncle Johann, they were just some guys growing pot in the woods. You didn’t kill anybody, did you?”

“Oh no. The CIA wants us to keep a few for interrogation.” He folded a buddy tab on the much diminished roll of tape and hung it back on his belt.

“Ah, okay.” Caleb put his pinkie to his mouth and thumb to his ear. “I gotta go to the main road to find a phone. I’ll call in a pick-up, okay?”

“Roger that. See that perimeter wire? Watch out for booby traps, kid.” As the boy left, he crouched with his back to a big tree, watching, and listening for the helicopter.