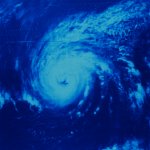 As cyclones (southern hemisphere hurricanes) go Ita packed strong winds into a tiny package.  Cyclone Ita drowned the Solomon Islanders, then zeroed in on Cooktown in Queensland and blew trees and roofs around before heading south for the city of Cairns. Haiyan (super-powerful) recently smashed the Philippines, Sandy (super-sized) inundated New Jersey and New York last year and the Gulf Coast including New Orleans hasn’t recovered from Katrina yet. Some data says we’re getting stronger storms because of climate change while other data implies that there is too much natural variation to confirm one way or another. Weather Underground has a great discussion on the question.

In Neighbors, the fourth of my Elise t’Hoot science fiction books, I had the north Atlantic coast of South America hit by two Ita-sized hurricanes in a row, destroying all the families there possessed. They became refugees and were exiled along with lots of other ‘excess’ people. It may be hard for scientists to state for sure that any given hurricane or cyclone or typhoon is more vicious because of climate change, but when the sea level rises a few feet, these storms and their flooding storm surges will certainly get closer to more people. With the jet stream going loopy, these storms may romp outside their typical tracks. For example, three strong wintertime storms just pummeled England only a day or two apart, revealing World War 2 ordinance and 10,000 year old forest remains.