I have bought more blueberry plants than I care to admit. I got six low bush beauties for this zone from Stark Brothers a few years ago and put then in perfect pH, good soil. They lived one season, all dying before bearing the next year. As these were planted around a flowerbed, I shelled out for six more from Stark but put them in large containers. No good, death followed. I purchased several four-foot tall high bush plants from a Tennessee greenhouse outfit, thinking a bigger size would be heartier. I put them in a completely different place, in the prepared ground. They died before the first frost and did not come back out in the spring. I contacted the Kentucky Blueberry Growers Association this year and bought ten supposedly perfectly suited bushes. I put them in containers so I could acclimatize then better. In three weeks they were shriveled sticks although I followed conditioning instructions to the letter.

A sane person would give up on them. I hate giving up. This lay on my stubborn mind as I went out to pick strawberries last Sunday. Sure, the strawberries are taking over creation. Weeding around them, I was astounded to see two of the original Stark bushes in pots I had abandoned as doomed had ripe berries. 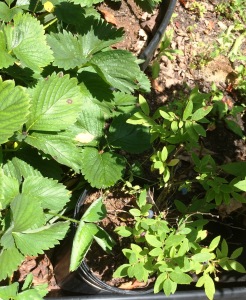 I had left those pots in the strawberry enclosure just in case, but held out no hope for them after so long. That area is a purgatory for failed roses, raspberries, grapes, a fig, altheas and blueberries, the last step before oblivion. There they are anyhow, spindly and sparse but alive. The fruit is not much larger than blue BBs. Gee whiz, I love the little guys, how could I not?